I must have said that line a couple dozen times over the course of the last few weeks. As I know is the case with many people, my recent move to a new place made me realize once more just how many material items I actually own.

I think most of us have been in this situation at one point or another, piling all of our worldly possessions into storage totes, bags, and boxes so we can move them to a new location where they will go mostly unused and collect a new layer of dust. At least until the time comes to move them yet again.

Let’s face it, in our modern, American society, we have a lot of stuff. And I don’t just mean knick-knacks and clutter.

Much like our overabundance of food, our level of material prosperity is unprecedented in history. For example, a hundred years ago, automobiles were still considered luxury items for the wealthy. Today nearly everyone has one, including plenty of kids who are still in high school.

Then there are our electronics. Even those of us who are of rather modest means still tend to have laptops and smart phones. We like to complain that we have no money, yet we can find a way to drop $600 on a new iPhone. Our great-grandparents who lived through the Depression Era would mock us to scorn—and rightfully so—for complaining that we are poor. The vast majority of us have no idea what that word even means.

By way of contrast, I would point to the Athenians of Classical Age Greece. As I explain to my students every year, even wealthy Greeks would have been considered poor by our standards. While we today have so much stuff that we need to hold garage sales or make regular trips to the thrift stores in order to get rid of it, most people in Classical Athens owned their clothing, a few blankets, a little pottery, some metal cooking utensils, and a bit of jewelry. And that was about it.

Keep in mind too that this wasn’t some backwards, stone-age civilization. Athens was the cultural center of the western world during the Classical Age. Its citizens weren’t a bunch of country bumpkins. Many of them were quite wealthy, in fact, and they had a flourishing culture with art, architecture, music, theater, and philosophy.

What they didn’t have though, was a lot of stuff. And they were probably a lot happier for it.

It might not hurt us to take the Greeks as role models in this regard. If nothing else, it would make moving a lot easier. 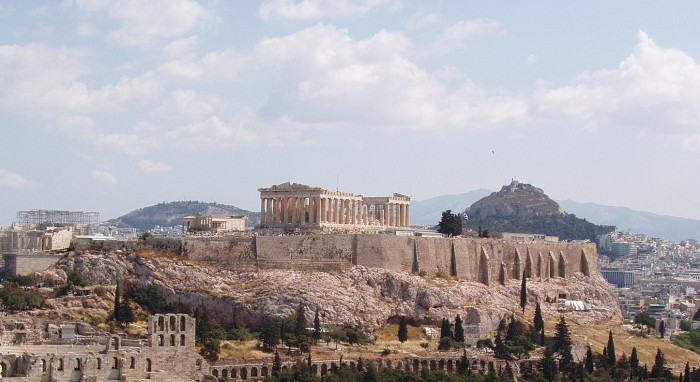