Walking through those doors is always a mind-blowing experience. I’m not exaggerating when I say I believe the sight behind those glass gates is one of the most incredible our country has to offer.

I am talking, of course, about the grocery store.

“The grocery store?” you ask. “That seems a bit melodramatic, don’t you think?”

While I have perhaps exaggerated a little, I’ve only done so in the sense that my mind isn’t always blown every time I pass through the doors of the local Cub Foods or Hy-Vee. But this is only because I, like most Americans, have become so accustomed to the superabundance of food with which our nation has been blessed that I often take it for granted. When I stop and think about it though, I am truly amazed.

Walking down the breakfast aisle alone, I count over 200 kinds of cereal, 97 kinds of jelly and jam, and nearly 30 varieties of peanut butter. Then there’s the produce section, overflowing with fresh fruits and vegetables, even in the middle of winter with subzero temperatures outside. There are fresh oranges from Florida and fresh bananas from Guatemala. There are sweet potatoes from Canada and berries from Mexico.

There is also the meat section, with every cut imaginable, both fresh and frozen. There’s beef and pork and poultry and seafood. If I so choose, I can purchase and consume filet mignon or lobster or ribeye or octopus.

My point is that we in the United States today have access to a greater amount and greater variety of food than the people of any other civilization in the entire history of the world. For the last several thousand years of human existence, most of mankind—or rather all of mankind—has only been able to dream about the variety of foods on the shelves in our grocery stores.

Let’s be honest, we are living like kings. Even the poorest among us can eat better than many of the wealthiest men of ages past.

A case in point is meat. It used to be that most people didn’t get to eat meat on a regular basis because it was too expensive. In many societies it was considered a luxury item to be consumed only on special occasions. Today, however, we get to eat meat, if not every day, at least multiple times a week. Even dirt-poor history teachers can pick up a Big Mac or throw some pre-pattied burgers on a $10 mini-grill from Walmart.

It’s hard to deny that we have it pretty good. While our ancestors used to have to go out and hunt and forage if they wanted to eat anything, we today can simply pick up the phone, order a pizza, and have it delivered—hot and delicious—right to our doorstep.

I’ll say it again: we in the United States today have access to a greater amount and greater variety of food than the people of any other civilization in the entire history of the world.

And how do we celebrate this superabundance of food?

Well, by wasting a lot of it, unfortunately.

It’s estimated that Americans throw away 6 billion pounds of food every month. That’s about 20 pounds of food per month for every man, woman, and child in the country. Of course not all of this waste happens at the consumer level. Plenty of food gets discarded at the source or at the retail level as well.

I think a big part of the problem is the need for Tort reform. Many caterers, for example, won’t even let their own customers take home leftovers for fear of being sued if they happen to become ill after eating them.

Even more important though, I think, is a change in attitude. We need to stop taking this abundant food supply for granted. Most people in history haven’t had nearly this level of prosperity, and we might not always have it either. We need to be more grateful for it. And more amazed by it. 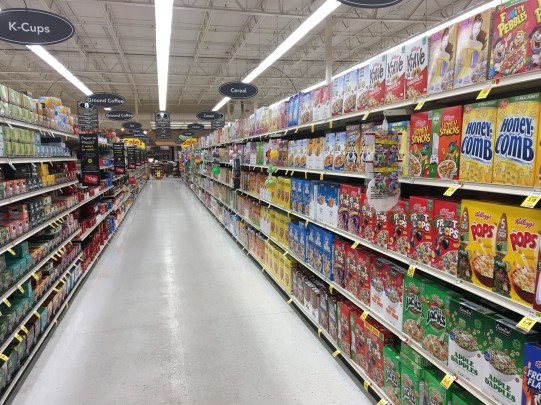 One thought on “Our Land of Plenty”