Skip to content
HomeGrabbing Women: Trump’s Obscene Comments Reflected a Broader Cultural Problem, and We Need to Fix It

Last October, American citizens were absolutely shocked by the obscene and degrading comments about women made by presidential candidate Donald Trump.

While politicians of all stripes rushed to condemn Trump following the leak of his embarrassing “locker room banter,” he still managed to win the election and become President of the United States. The question then was, how could this vulgar misogynist win public office? Didn’t American voters understand the damage they’d do to little girls who’d overheard the future leader of the country discussing members of their sex as if they were pieces of meat?

I think a major reason Trump’s lewd comments damaged him as little as they did is that many voters recognized the hypocrisy in his opponents’ criticisms. Unfortunately, we don’t have to look very far to see that our culture has a well-established tradition of objectifying women. This is a tradition that reaches across party lines and social classes.

In the Republican Party, President Warren Harding and President Dwight Eisenhower—both of them married men—were known to have kept some extra ladies on the side. Among the Democrats, the notorious womanizer Bill Clinton merely carried on a common practice with his numerous raunchy escapades. Two of the most famous and well-loved Democratic presidents are known to have been less-than-faithful to their significant others. The first of these, Franklin Delano Roosevelt, architect of the New Deal, actually died in the company of his mistress. The second, John F. Kennedy, allegedly had numerous flings with various young women and was not above requesting sexual favors for himself and for his buddies.

This debasing treatment of women is not limited to our ruling class either. Those young girls whose self-esteem has allegedly been damaged by Trump’s comments are the same girls who grow up being exposed to Cosmopolitan every time they accompany their parents to the grocery store. Is it really healthy for little girls (or little boys for that matter) to be exposed to images of scantily-clad women and headlines such as “Bad Girl Sex: 75 Tricks for Nights When You Want to be Just a Little Naughtier”? Are we not teaching our daughters that their primary value is as sex objects?

None of this excuses Trump’s past comments about women, but it does show that we clearly have a broader problem when it comes to treating women with respect. In a democratic form of government especially, we get the leaders we deserve. Our elected officials reflect the values of the people. If we are genuinely concerned about having leaders who respect women and hold to a higher ideal in sexual matters, we need to bring about change by purifying our own lives first. 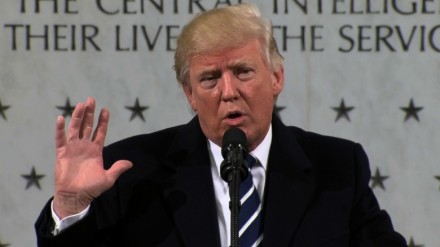 2 thoughts on “Grabbing Women: Trump’s Obscene Comments Reflected a Broader Cultural Problem, and We Need to Fix It”